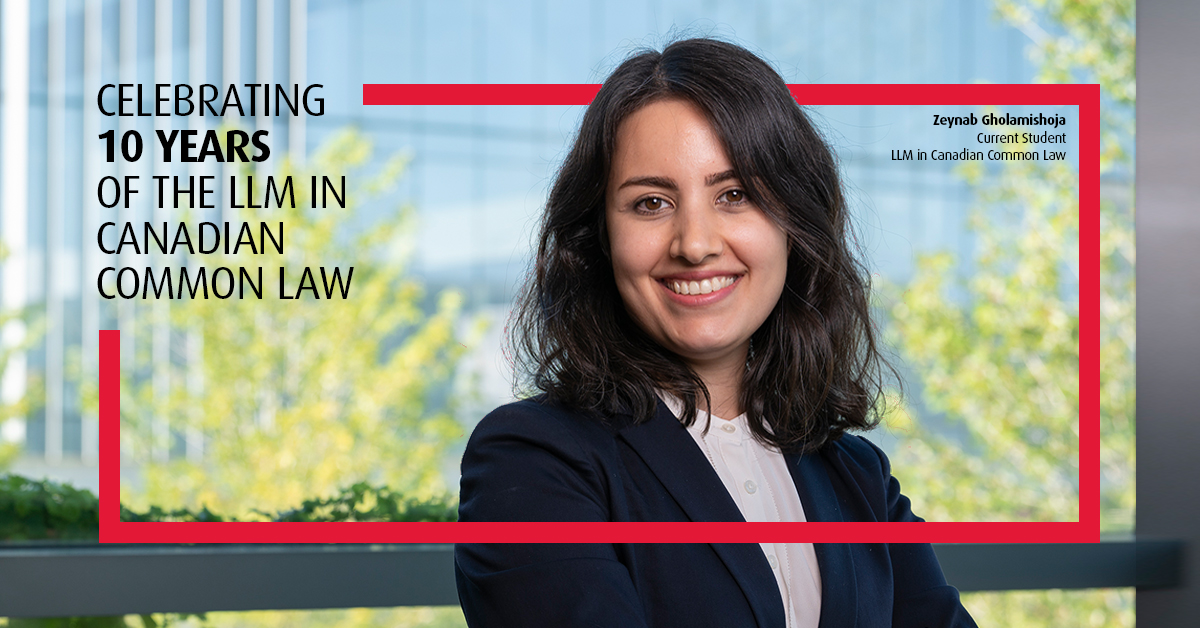 Zeynab Gholamishoja’s path to the legal profession has been a long one. The OsgoodePD International Entrance Award winner first set her heart on the field all the way back in her primary school years in Iran.

“I have always known that I wanted to be a lawyer,” Gholamishoja says, explaining that she found early inspiration in her own father’s personal lawyer, a family friend and trusted advisor.

“I saw the good advice he had for my father on the growth of his business, and how he helped other people. I could tell – even as a kid – that this was something I wanted to do in the future,” she adds.

But her journey has also been proved to be a bumpy one, thanks to obstacles Gholamishoja has encountered in both her home country and in the U.S., where she completed her first LLM.

However, after enrolling in Osgoode’s Professional LLM in Canadian Common Law, Gholamishoja can feel the barriers falling away as she prepares to restart her legal career in Canada.

“I love the atmosphere here, and I think Toronto is a much better place for international students and immigrants,” she says.

Despite the fact that Iran is a civil law jurisdiction, Gholamishoja says it was while studying law at the University of Tehran that her curiosity was first piqued by the common law, during lectures that touched on the differences between the two legal traditions.

Soon after her graduation, Gholamishoja began an LLM in International Trade and Business Law at the University of Arizona.

“I loved the university and the course, but finding a job was really hard as an international student,” she says. “At that point, I was also happy to come back to my home country to practice.”

However, when she returned to Iran in 2017, the timing was not ideal for Gholamishoja to pursue her burgeoning interest in cross-border commerce, thanks to economic sanctions imposed on Iran by a number of wester nations, which severely restricted the country’s key industrial sectors and foreign trade capabilities.

Still, Gholamishoja was able to put her skills to work – as a legal assistant at Tehran’s Jamali Law Firm, preparing pleadings and other documents for hearings in court, and later as a contract manager negotiating, reviewing and drafting agreements for an investment firm – but she found her opportunities limited in a society with a notoriously conservative view of women’s rights.

“I couldn’t find my path there, so I decided to come to Canada,” she says.

According to Gholamishoja, Osgoode was the natural choice for her second LLM, both because of its stellar reputation, and because of the way its core courses are specifically designed to meet the requirements of the Federation of Law Societies of Canada’s National Committee on Accreditation, as she looks to become licensed in Canada.

After kicking off the term with Osgoode’s first in-person orientation since 2019, Gholamishoja has relished the chance to meet with her LLM classmates and faculty face-to-face as classes slowly return to their pre-Covid normal.

“I prefer to be in person so that I can have all my questions and problems answered by the professor,” she says. “I really like my classmates too – everyone is very helpful, and we have been meeting up to review our courses and study together.”